On Thursday the 16th of June, the official preview of the Art-in-the-Office project took place in Contern. On this occasion, the Luxembourgish artist SUMO and the students of the Lycée des Arts et Métiers (LAM) exhibit their artwork which captured the eyes of all present on the evening.

Art-in-the-Office, a project initiated by Labgroup and with the support of ALD Automotive, integrates art into the day-to-day working environment of Labgroup’s customers by improving the esthetics of everyday objects like its secure destruction containers.

For this first edition, Labgroup called upon a recognized talent from Luxembourg; the artist SUMO. His challenge; to transform Labgroup’s secure destruction containers into artwork.

During the official preview of SUMO’s artworks on Thursday, 16th of June, the original container painted by the artist was auctioned. This unique piece of art, has been reproduced on 50 Labgroup secure containers which have been made available to Labgroup’s secure destruction customers. This is the first of three projects that will be realized for the Art-in-the-Office initiative. The auction was won by no other than Bob Kneip, CEO of Kneip Communication, who is a passionate art collector.

Furthermore, the guests discovered the projects of the LAM students, created as part of the Art-in-the-office competition, as well as the winner’s project which has been reproduced on a Labgroup container’s. Amongst the 16 projects presented, the student Charlie Diswiscour project was selected by the jury, composed of the artist SUMO, a teacher of the LAM, Bob Kneip (CEO, Kneip Communication) and Romain Poulles (CEO, ProGroup). Unfortunately, Charlie could not be present on the evening but was represented by her father, Luc Diswiscour, who proudly accepted the prize on behalf of his daughter, which was a gift voucher of 500€, offered by Orange Luxembourg. The evening continued in a very artistic atmosphere with a refreshments offered by Gmöhling, the manufacturer of the secure destruction containers.

“Finally, we can say that the project has been a great success. The students of the LAM have created unique and original projects. Every single student has distinguished himself by their own style and has interpreted the subject which was “creation of an original artwork on a container” in a different and unique way. The profession of the expression of shapes and colours allows everyone to express themselves differently. We would like to thank the students as well as the teachers from the Lycée des Arts et Métiers, Marianne Grisse and Patrice Putz who have created as various projects. Even if one unique project has been chosen, we can without any hesitation confirm that all projects deserve a big congratulation. We would like to thank SUMO, with whom we will have the pleasure to collaborate with for the 2017 edition. He has created an artwork that is so original and unique, that we were delighted to see Bob Kneip winning the auction of this master piece. Even if we were sad to see this work of art leave the Labgroup building”, Bernard Moreau, CEO Labgroup.

“This project allowed me to create an artwork very different from anything I have created previously in my career as an artist. I am glad to have taken this challenge and that I had the opportunity to coach the young artists from the LAM who remembered me of my earlier times as a student in this High-School. I’m delighted that Bob Kneip has won the auction because he admirers and supports the sector of art as much I do. I think it is important to continue to support and encourage this project and I’m looking forward to starting work on the next edition”, SUMO, artist from Luxembourg.

Discover the article about the Art-in-the-Office project by Labgroup on the website chronicle.lu

Art-in-the-office, a three-year project launched by Labgroup and with the support of ALD Automotive, integrates art into the day-to-day working environment by improving the aesthetics of everyday objects; for this first edition, Labgroup called upon a recognized talent from Luxembourg; the artist SUMO – his challenge, to transform Labgroup’s secure destruction containers into artwork.

“This project unites two conflicting concepts: destruction and creation. The creative element consists in the conception of an original artwork displayed on a container, which is ultimately destined to collect material for the purpose of destroying it. This paradox constitutes one of the fascinating aspects of the artwork. In addition, my works are typically composed of several layers, whereby each successive layer destroys the previous one” stated SUMO.

Labgroup integrates art into the day-to-day life of its customers by improving the aesthetics of its secure destruction containers.

Art-in-the-office, a three-year project launched by Labgroup and with the support of ALD Automotive, integrates art into the day-to-day working environment by improving the aesthetics of everyday objects. For this first edition, Labgroup called upon a recognized talent from Luxembourg; the artist SUMO. His challenge; to transform Labgroup’s secure destruction containers into artwork.

« This project unites two conflicting concepts: destruction and creation. The creative element consists in the conception of an original artwork displayed on a container, which is ultimately destined to collect material for the purpose of destroying it. This paradox constitutes one of the fascinating aspects of the artwork. In addition, my works are typically composed of several layers, whereby each successive layer destroys the previous one. », SUMO.

On Friday 3rd of June, all actors which have contributed to the success of the project Art-in-the-office, could admire a preview of the famous container redesigned by SUMO. Both aesthetic and functional, his artwork has been reproduced on 50 containers which have already been made available within the offices of Labgroup’s customers.

The event gave the occasion for the students of the Lycée des Arts et Métiers (LTAM) to present their artworks which has been created as part of the Art-in-the-office competition: 16 unique and creative projects, amongst which a competent jury will have to choose the artwork that will be reproduced on Labgroup’s containers.

The name of the winner will be announced during the exhibition which will take place this Tuesday 16th of June, by a jury composed of the artist SUMO, a teacher of the LTAM, Bob Kneip (CEO, Kneip Communications) and Romain Poulles (CEO, ProGroup), both passionate collectors and admirers of art. The winner will receive an award, offered by Orange Luxembourg.

During this event, the auction of the SUMO container will be closed (see www.artintheoffice.org), before the closing drink offered by the company Gmöhling which produces the secure destruction containers.

« The importance of the social role of art is often underestimated and discouraged by our society. Labgroup wants, via Art-in-the office, to support this sector of the expression of shapes and colours. We aim to integrate art into our daily lives as well as the daily lives of our customers. On the one hand, it is a way of thanking our customers for their trust, on the other hand, it is a way to remember that art has no limits. Artistic expression accompanies us every day and can be found even on the most common objects like our Labgroup containers. The collaboration with SUMO was logical since he does not limit his art to paintings. », Bernard Moreau, CEO Labgroup.

Labgroup is a Luxembourg-based company that offers information management and archiving services to businesses in the financial and insurance sectors and to administrations and businesses from other sectors. Labgroup’s range of services includes digitising paper documents, storing and destroying physical archives, capturing and conserving electronic archives, protecting and restoring data, preserving IT media and giving consulting services and training. Labgroup also has offices in Ireland and Gibraltar. As a Financial Sector Professional (PSF), Labgroup is monitored by the Luxembourg Financial Services Supervisory Authority (Commission de Surveillance du Secteur Financier, CSSF). Labgroup is ISO 9001 and ISO 27001:2005 certified and will soon acquire PSDC status.

An opportunity to thank the ones that ease our researches and information exchanges… Today is the International Archives Day!

QU’EST-CE QU’UNE ARCHIVE ? / WHAT ARE ARCHIVES?

Archives are documents of different types, age or support that are produced by an organization as part of an activity. Defined as being a management and governance tool for businesses, archives are witnesses of past events. They provide evidence, explanation and justification both for past actions and current decisions.
The optimization of the day to day use as well as the retention schedule of your archives improve your efficiency and enable to stay compliant. Mostly considered as a burden rather than an asset, archives represent an added value to your business.

This new law acknowledges the probative value of electronic copies of paper documents that therefore allows their destruction, and creates the PSDC status (Dematerialisation and Archiving Service Provider). The electronic archives, created and maintained by a certified company, benefit from the same legal value as the original document.

The Three Ages Theory is a fundamental notion enabling the management of the lifecycle of archives. Every archive from its creation to determination of its end (destruction or retention) goes through those periods:  active, semi-active, inactive.

Manage their active and intermediate archives: 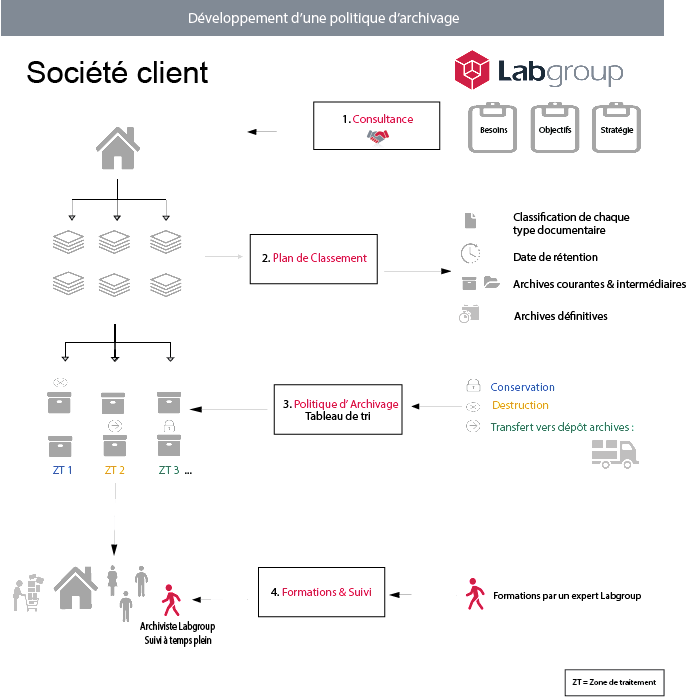 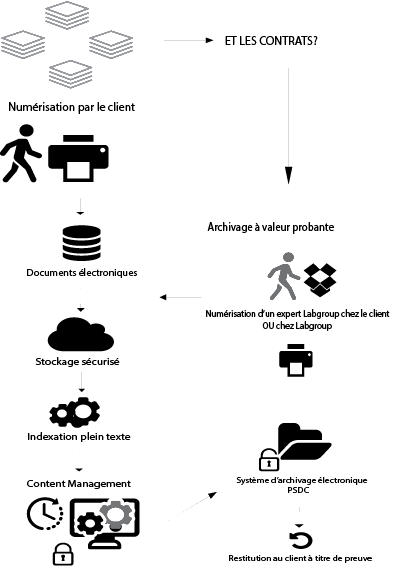 https://www.labgroup.com/wp-content/uploads/2016/04/CP-Numen-Lab-UNI-3.jpg 680 800 Cindy Reff https://www.labgroup.com/wp-content/uploads/2019/06/Labgroup-Logo-White.png Cindy Reff2016-06-09 10:49:232016-08-16 12:45:08
Paperjam – Services académiques à numériser
Scroll to top
This site uses cookies and other tracking technologies to assist with navigation and your ability to provide feedback, analyse your use of our services and assist with our promotional and marketing efforts. Accept Read More
Privacy & Cookies Policy